Standing up for Atheists 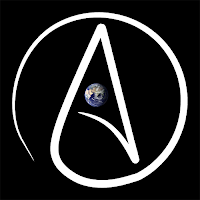 DRAFT - I intend to compile all my writings from the past by June this year.

I have been speaking up for Atheists for a very long time. I have difficulty in understanding the religious people's belligerence towards Atheists. Mind you, it is not religion, it the people in the name of religion, and not all people, but some.

Here is a list of speaking up or standing up for Atheists. It is quite a long list, but I will begin adding as time permits and reorganized it.

We see God as one, none and many and in every form; male, female, genderless and non-existent, being and non-being, nameless and with innumerable names. We are one nation under God, indivisible with liberty and justice for all. We are represented by every race, nationality, ethnicity, language, culture and religion. Americans together are committed to preserve this pluralistic heritage of America.

ATHEISM ON RISE
Whether we admit or not, most of us have a percent of Agnostic or Atheist residing within us, and I was no exception. Mother Teresa in her letters to the Vatican had expressed her occasional doubts, and that has helped me free myself that it was Ok to have doubts. A Catholic Nun and a Saint with fervent conditioning in religious beliefs had the doubts, she happens to be one of my mentors. http://theghousediary.blogspot.com/2010/04/atheism-on-rise.html

THE ATHEIST DELUSION
Humans have always wondered about God, its existence and its appearance. We go through the phase of being a disbeliever, particularly when we cannot understand the injustices to us and to the world around us. Many of us have had the delusions about God as presented one time or the other. http://wisdomofreligion.blogspot.com/2008/03/atheist-delusion.html

WHY DO WE PRAY FOR CHRISTOPHER HITCHENS
Christopher Hitchens is dying. Hitchens is a terrific writer, a bracing thinker and, in recent years, a famous and implacable atheist. He has been diagnosed with esophageal cancer, which might have slowed his debates with religious figures in support of his book God Is Not Great, but it hasn't tempered his tart observations on life.http://theghousediary.blogspot.com/2010/11/texas-faith-why-do-we-pray-for.html

THEISTS QUESTIONS TO ATHEISTS
The common approach we take for living our daily life is the existence. Theist and atheist are bent on proving each other wrong or prove that one’s fact is superior to the other. What is the need for it? Better yet, what is the gain? http://wisdomofreligion.blogspot.com/2008/06/theists-questions-to-atheists.html

ATHEISM ISN'T THE FINAL WORD
Belief or non-belief in God does not make a big dent in one becoming a egomaniac. Morality is common social values internalized, some derive from religion, as it is a source, but morality does not necessarily hinge on being God-centric. http://wisdomofreligion.blogspot.com/2007/04/atheism-isnt-final-word.html

EVANGELICAL ATHEISTS
My audience surged for the shows on Atheism and same goes with the workshops, the most attendance was for Atheism; that was three years ago. It is changing dramatically every day, there is a survey that indicates that ten percent of the Americans are Atheist or Humanists. http://wisdomofreligion.blogspot.com/2010/07/evangelical-atheists.html

SO WHAT IF YOU DON'T BELIEVE IN GOD
Belief in God is not a requirement to live a normal day to day life, it is not a requirement to be a good human being either. Whether one believes in God or not, the creator loves his creation anyway, and every human will spend the time he was charged up with whether one is a theist or an atheist. Every life will end. We have created God in our own image. http://theghousediary.blogspot.com/2009/10/so-what-if-you-dont-believe-in-god.html

BAN ON ATHEISTS
How insecure is the council? Are they afraid that by looking at Atheists sites, one would give up his or her faith? If so, let them. If the council can produce a letter from God, signed by God himself (herself or itself) tellilng the council to ban the atheist, I would accept the letter. God will not do such a thing, neither God will sign a letter behind any one's back. http://wisdomofreligion.blogspot.com/2008/08/ban-on-atheists.html

RISE OF ATHEISM IN AMERICAThere is nothing evil being an Atheist, and one should not look down on it, if we do that, it amounts to arrogance of being righteous.. http://theghousediary.blogspot.com/2012/04/rise-of-atheism-in-america.html

More to be added time permitting...

Mike Ghouse is committed to building a Cohesive America and offers pluralistic solutions on issues of the day. He is a professional speaker, thinker and a writer on pluralism, politics, civic affairs, Islam, India, Israel, peace and justice. Mike is a frequent guest on Sean Hannity show on Fox TV, and a commentator on national radio networks, he writes weekly at Dallas Morning News and regularly at Huffington post, and several other periodicals.www.TheGhousediary.com is Mike's daily blog.
Posted by Mike Ghouse at 5:56 PM