Persecution of Falun Dafa in China

(Clearwisdom.net) It was shocking to learn that in a secret concentration camp in the Sujiatun District in Shenyang City, at least 6,000 Falun Gong practitioners are locked up. Their internal organs are harvested and sold for profit, and their murdered bodies are cremated to destroy the evidence. Practitioners in Dallas, Friends of Falun Gong at the University of Texas at Dallas (UTD) and a representative of a non-governmental organization held a press conference in front of the UTD Student Union at noon on March 16, 2006. They strongly condemned the Chinese Communist Party's (CCP's) atrocities and called on the international society to immediately investigate, stop the killing and rescue the practitioners being tortured and murdered for profit.
In the press conference, Ms. Fu, President of the Friends of Falun Gong UTD, introduced the shocking inside story about the brutality at the Sujiatun Concentration Camp, and called on all UTD faculty and students to condemn the CCP's barbarity and help rescue those practitioners being persecuted in China.
Ms. Zhang, a practitioner and information specialist, said in her speech, "Concentration camps for detaining Falun Gong practitioners were reported a few years ago. AFP reported on October 1, 2000 that two concentration camps were established to imprison Falun Gong practitioners. One was in Northwest and the other in Northeast. Each camp can imprison 50,000 people. Minghui.org (the Chinese version of Clearwisdom) reported on October 6, 2000 that a concentration camp was established in Xinjiang to imprison practitioners. Insiders disclosed that practitioners were taken to Xinjiang by train. But no further information was available because no one comes out of there."
Practitioner and computer engineer Mr. Sun introduced Falun Gong and explained why Falun Gong is persecuted in China and why many people had not heard of Falun Gong after it began to be persecuted for nearly seven years. Mr. Sun said that even in China many people do not know that other people are persecuted because of personal belief. It is because of the information blockade in China. The CCP spent a huge amount of money to filter information over the Internet and demonize Falun Gong. The CCP breeds hatred towards those it does not like. It also forces western countries and media to keep silent on the Falun Gong issue with economic enticement. Mr. Sun called on people to spread the facts to more people.
Dr. Wu, a teacher in a local community college, said in her speech, "After the Nuremberg trials of Nazi war criminals, people hoped that concentration camps like Auschwitz and Buchenwald would never again appear in the future. Unfortunately, a similar concentration camp is running under the control of the CCP in China and the genocidal policy of Jiang Zemin, and the CCP is being applied to kill practitioners. In addition, the CCP is gaining a profit from the victims by harvesting their internal organs. This clearly exposes the CCP's evil nature. I call on the international community and human rights organizations to investigate the Sujiatun Concentration Camp. I urge all kind-hearted people to help end the CCP's killing of innocent people."
Practitioner Ms. Hu said, "The CCP's persecution of Falun Gong has continued for nearly seven years. Such a brutal persecution is beyond normal people's imagination. More people should know about this. I call on the Chinese people stop being so numb, pay attention to the practitioners being tortured and help end the brutal persecution."
Mr. Mike Ghouse, president of the Foundation for Pluralism, attended the press conference and gave a speech. He said that he was shocked after hearing of the brutal persecution against Falun Gong practitioners. He expressed the concept that when an unfortunate incident occurs, for people with righteousness, they at least can speak out. If everyone keeps silent, when an unfortunate thing occurs to you, no one can speak for you. Mr. Ghouse called on people to be courageous and speak out for righteousness.

At noon, many faculty members and students passed by the Student Union. They stopped to learn about the event when they saw the banners and posters for the press conference. When they saw the practitioners' exercise demonstration, they could not accept the fact that that CCP brutally persecutes such a peaceful practice. Many students signed a petition calling for a halt to the CCP's killing of innocent people. Some faculty and students expressed their interest in Falun Gong and started to learn the exercises on site. 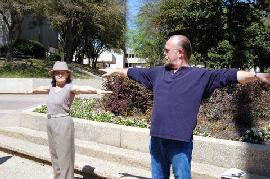 Learning the Falun Gong exercises
Practitioners in Dallas will hold a rally near the Richardson Chinatown to condemn the atrocities in the Sujiatun Concentration Camp, from 11:30 a.m. to 1:30 p.m. on March 18, 2006.
CATEGORY: Rallies & Protests
Posted by Mike Ghouse at 8:13 PM No comments: